One of the most polarizing players in the 2020 NFL Draft is Oklahoma QB Jalen Hurts. Expected to go in round 2 or 3, Hurts is a dual threat QB who is coming off a senior season in which he finished 2nd in Heisman voting, and almost certainly would have won college football’s most prestigious trophy if Joe Burrow hadn’t had the greatest year in NCAA history.

Hurts’ path to the draft is anything but ordinary. Once an 18-year old true freshman game manager QB at Alabama, Hurts had a very solid yet unspectacular career for the Crimson Tide, showing no signs of being anything but a potential late-round pick in the NFL. After getting benched in the National Championship Game in favor of another freshman phenom, potential top 5 pick Tua Tagovailoa, Hurts was a backup for a year before he transferred to Oklahoma and shattered his career highs in every statistic. I’m here to compare and contrast his Alabama film with his Oklahoma film to see if Jalen truly took strides as a pro prospect in his career and cut out the bad habits that caught up to him at Alabama, or if his offensive explosion in 2019 was simply a result of Lincoln Riley’s dynamic offensive scheme and weak Big 12 defenses.

Coming into Alabama in 2016 and taking over for the struggling Blake Barnett in Week 1 against USC, it was immediately apparent that Hurts wasn’t just a one-trick pony, run-first quarterback. Hurts had a big, rocket arm in high school and announcers highlighted that going into his first college game. What Hurts struggled with most in his time at Alabama was accuracy. Despite only averaging a low 7.3 yards per passing attempt in his freshman year at Alabama, Hurts still completed just 62.8% of his passes. Compare those numbers to his senior season at Oklahoma where he averaged a staggering 11.3 yards per attempt and an impressive 69.7 completion percentage, and it seems like Jalen was a bit of a game manager in his first year at Alabama. But who can blame him? Not many true freshman QBs come into college football throwing the ball all over the field.

Something Hurts showed in his freshman and sophomore year at Alabama, despite his accuracy struggles, was an ability to take care of the ball, including a 2017 season in which he threw only 1 interception in 14 games. The first play of his career, however, was an absolute nightmare. After replacing Barnett late in the first quarter, Hurts ran a read option play in which he immediately fumbled… twice.

While this is obviously a less-than-ideal start to a career for Hurts, it also illustrates something that I love about him and no one will ever be able to take away: his mental toughness. Hurts is the ultimate team player, shown on the field and off the field, including his willingness to sit behind Tua in 2018 for the better of the team. A true freshman doing this in a primetime game on his first play could rattle you for the rest of the game. Jalen recovered and led his team to victory.

In this play only 2 drives after his fumble, we see the debuting Hurts show off his rocket arm in a 50-yard touchdown pass to ArDarius Stewart. Notice how Hurts doesn’t even really step into the throw traditionally; he takes more of a gather step or hop step. More on this later.

Hurts and the Crimson Tide would finish the year off by playing Deshaun Watson and Clemson in the National Championship, which in my opinion was one of the worst games Hurts played in his career. Alabama ran a conservative, quick screen-based offense that featured throws batted down at the line, throws too short, throws too high, and throws behind the receiver from Hurts, completing only 13 of his 31 passes in the game. In this game against Clemson, Alabama got away from what worked with Hurts. Because of his speed, improvisational skills, lateral quickness, and strong arm, Jalen Hurts is best when he has the ball in his hands for longer, and while this does have to do with his slow processing of defenses, it also gives him the chance to get in rhythm more and make better plays. Oregon QB Justin Herbert is one of my favorite players in this year’s draft, but he doesn’t excel in broken down, off-schedule plays and is more of a quick-throw type of quarterback. Jalen is the opposite.

As an example, here are some quick throws Hurts missed against Clemson. It’s not his game, especially against a top-tier defensive line. Once again, in these throws you can see him struggle to traditionally step into the throw, relying mostly on his natural arm strength and a flick of his wrist. I believe his subpar footwork, specifically his lack of stepping into throws and the kick he often does with his back foot, are what causes him to miss quick passes. Some QBs, such as Patrick Mahomes, can get away with poor footwork, but Hurts ain’t Mahomes. Keep an eye on Hurts’ leg kick in the first two plays below.

Now comparing that to plays where Hurts has more time to get in rhythm and create space for himself in the pocket, he looks like a different player.

I have no doubt that Hurts can make accurate downfield throws on broken plays, rollouts, and 5-step drops. What I want to see out of his Oklahoma tape is improved footwork and quick throw accuracy. Hurts is athletic for a QB, but he doesn’t have elite game-changing speed quite like his Oklahoma counterpart Kyler Murray had and will need to become a better pocket passer to succeed in the NFL. 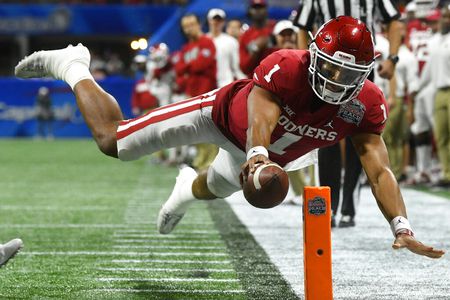 Like Baker Mayfield and Kyler Murray before him, Jalen Hurts transferred to Oklahoma looking for an opportunity to start in Lincoln Riley’s air raid offense. Hurts no longer had to face the murderer’s row of SEC defenses like LSU, Florida, Georgia, and Auburn, and would instead engage in high-scoring affairs with teams like Texas, Baylor, Kansas State and Oklahoma State, schools not exactly known for their defense. Hurts had a fantastic season, throwing for almost 4,000 yards, running for 1,300, and scoring 53 total touchdowns. Now we see if he was able to correct the bad habits that eventually cost him the starting job at Alabama.

The offense at Oklahoma was much better suited for Jalen Hurts’ strengths than the offense at Alabama was, and that may be the best explanation for Hurts’ meteoric rise. Due to the surplus of talented receivers Alabama had during Hurts’ career, like Calvin Ridley, ArDarius Stewart, Jerry Jeudy and others, and due to Hurts’ relative inexperience in the college game starting as a freshman and sophomore, Alabama ran a lot of screen and swing passes as an attempt to get their incredibly skilled receivers the ball in their hands with open field to work with. Oklahoma ran an occasional play with a pass behind the line as a change of pace, but even in their quick 3-step drop pass plays, Hurts would normally throw intermediate routes instead of checkdowns. This is why Hurts’ yards per attempt skyrocketed once he got to Oklahoma.

In the plays we saw earlier, Hurts struggled much more trying to accurately place the ball on 3-step drops. Here, in Oklahoma’s signature comeback win over Baylor, Hurts’ first touchdown pass comes on a 3-step drop 10-yard pass, an absolute fastball placed perfectly to the inside of the receiver that gives the defender no chance to jump the route. Why was this quick pass more accurate than his throws in the National Championship Game? No leg kick!!!!

Another example of Hurts showing improved footwork and accuracy on 3-step drops in this game:

I wanted to focus mostly on Jalen Hurts’ passing abilities in this deep dive, but I’d be doing him a disservice to not mention his running ability and style. While Hurts was always a good runner at Alabama, he became the most effective running QB in the nation in his lone year at Oklahoma. I see a lot of Marcus Mariota in Hurts, and I don’t mean that as a negative, with Mariota having flamed out in Tennessee this past season. Mariota actually had a very effective 2016 campaign in Tennessee when he threw 26 TDs and 9 INTs, which NFL teams would be more than okay with Hurts achieving. Both Hurts and Mariota are mobile, athletic QBs who have struggled with accuracy and processing defenses in their career. Despite Mariota running his 40-yard dash a tenth of a second faster than Hurts, Hurts is a much better runner than Mariota, for a reason I talked about earlier: toughness, but this time physical over mental. While Mariota has been plagued with injuries at the most inopportune times possible in his career, Hurts has never missed a game, even playing in every game the year he backed up Tua. Jalen runs hard and downhill on every single run play, and never shies away from contact. He’s a violent runner who only runs north and south, and even when he he makes a juke, he’s still covering ground upfield. Here’s one of my favorite Hurts runs that illustrates how aggressive he is in the cuts he makes.

Unfortunately, Hurts’ successful college career didn’t have a great ending. Tasked with facing LSU in the College Football Playoff semifinal, Hurts took a beating and regressed back to some of the bad habits that plagued him at Alabama. Hurts was very inaccurate, completing 15 of 31 passes for 0 touchdowns in the game. Hurts’ three worst games in his career were against Clemson, Georgia, and LSU, and all three teams had something very important in common: they were by far the best defenses Hurts faced in his career. All three defenses featured high-caliber, speedy NFL prospects in their front sevens, giving them the ability to contain Hurts’ rushing ability and force him to make quick, high-pressure throws. After being held to only 3 yards per carry against LSU, Hurts’ footwork once again became sloppy as he shifted to pocket passing. I am very confident that this is due to the speed and tenacity of LSU’s defense. Hurts knows if he holds onto the ball as long as he wants to, he’s going to get hit. So, he is forced to make quick decisions and as a result, his footwork gets sloppy again. Here is a wide-open touchdown to CeeDee Lamb that Hurts missed due to his trail foot sliding up and feet being completely horizontal to the goal line.

Jalen Hurts undoubtedly grew immensely as a player from his freshman to senior year. He improved his footwork, shortened up his long throwing motion, and gained much more poise as a pocket passer. However, when tasked with facing the country’s elite defenses in the biggest games of the year, Hurts’ bad habits took the spotlight. So in the end, while Hurts did improve, when the competition reached its peak, he did become a bit flustered. Because of this, I have Jalen Hurts as my 6th ranked QB in the draft, and I give him a 3rd round grade.

Hurts is a badass, exciting player. From the day he stepped foot in Tuscaloosa as an 18-year-old true freshman, he was a natural leader. I project him to be a starter down the road in the NFL, but he’ll need a couple years as a backup and spot-starter to really get a feel for the NFL game. I think Hurts would be a great fit for the Las Vegas Raiders. He is the exact type of high-character leader Jon Gruden and Mike Mayock want to have in their system, and he is the polar opposite of checkdown artist Derek Carr.

The NFL Draft begins on Thursday, April 23rd. Stay tuned for my mock draft once I finish grinding some more tape.