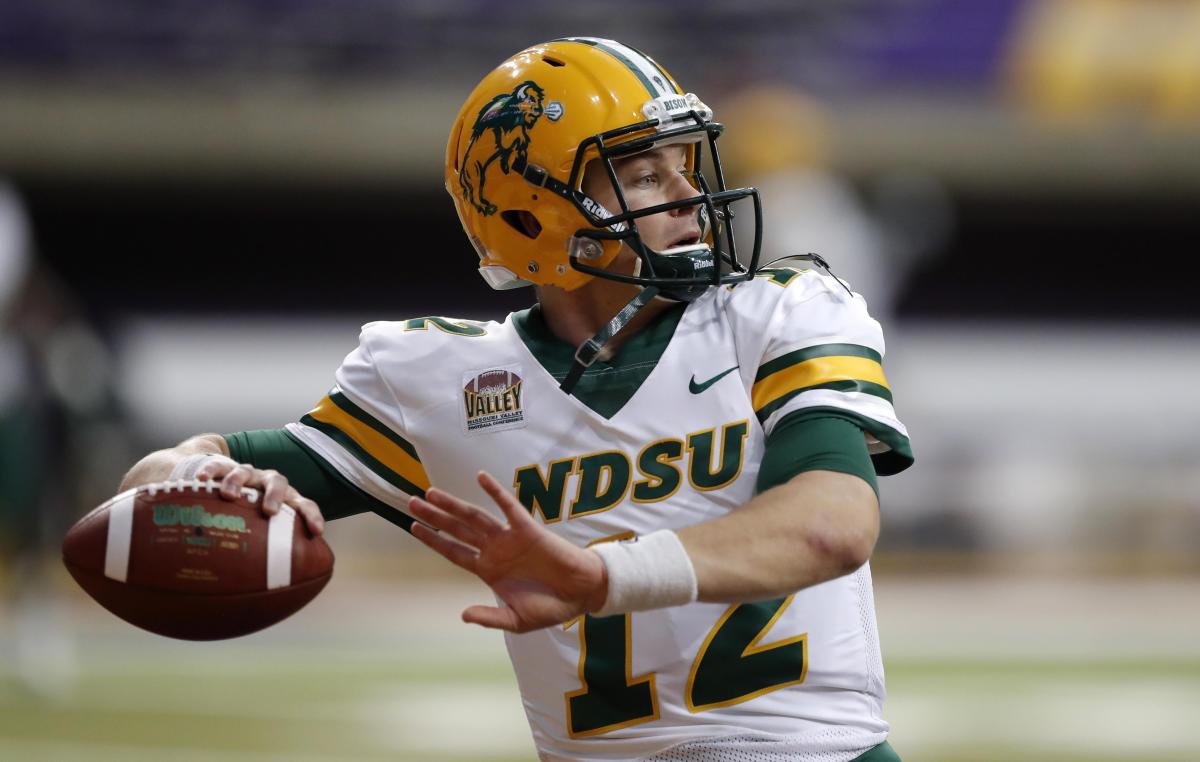 You don’t have to endlessly grind the tape to discover that Easton Stick does not have an “NFL arm” that will catch your attention from the jump. That being said, there are several qualities Stick possesses that make him a very intriguing NFL prospect.

The most impressive thing about Stick, and possibly any prospect in the draft is the fact that he boasted a 49-3 record as a starter in college. Coming from FCS powerhouse North Dakota State university, winning football games has been the norm for years, but nobody has done it to the level that Stick has. In terms of resume, I do not know if anybody in the history of collegiate athletics can match up with Stick.

As a freshman he backed up current Philadelphia Eagles quarterback Carson Wentz, until Wentz went down with a wrist injury week 6. This is where the legend of Easton Stick began, he came in relief for Wentz and led the Bison to an unblemished 8-0 record, setting the stage for Wentz to walk off into NDSU lore after recovering from his injury and winning the FCS Championship, which was his final game. The next 3 years of his career were just as impressive, winning 2 more National Championships and breaking multiple NDSU records.

Easton is a pure athlete, he runs the ball just as effectively as he throws it and mechanically his game is quite sound. He moves his feet very well and seemingly takes coaching well due to his impressive fundamentals. He never jumped off the screen as a prototype or a “stud” so to speak as someone who will intimidate you with his size, strength, and outright ability like his predecessor Wentz. But that isn’t Sticks game, he will kill you all day on rollouts and is pretty comfortable throwing the ball on the run, and when you think you have him stopped through the air, he will recognize your defenses overcompensation and break off for a 50 yard touchdown run. He is not going to dot you up with accurate throws all game, but never showed to be wildly inaccurate or inconsistent with his ball. Most of his miscues through the air were due to lack of requisite zip or just a bad decision with the football.

Stick has a tendency to telegraph his throws and playing at the FCS level definitely worked to his advantage as the DB’s are not nearly as rangy, aggressive, or quick as they are in say, the SEC (Lock) or ACC (Finley). That being said, there are times where Stick shows an incredible ability to zip the ball into a tight window 25 yards down the middle of the field or throw a beautiful touch pass to the back of the end-zone.

Overall, I have my reservations about Stick when it comes to the competition he played against and his questionable arm-strength/decision making at times but if anyone on the planet is a proven winner, it’s Easton Stick. Every single time this guy’s name has been called he has answered the bell, most times surpassing all expectations and I love that quality, especially in a quarterback, like accuracy, it is something you can’t teach. I think Stick has a game that can translate to a sustainable NFL career, but I do not believe he will ever be the bonafide superstar quarterback 1st round teams are looking for. With a floor this high, I would like to see a team in need for a solid/developmental backup make a play on stick in the 2nd-3rd round.