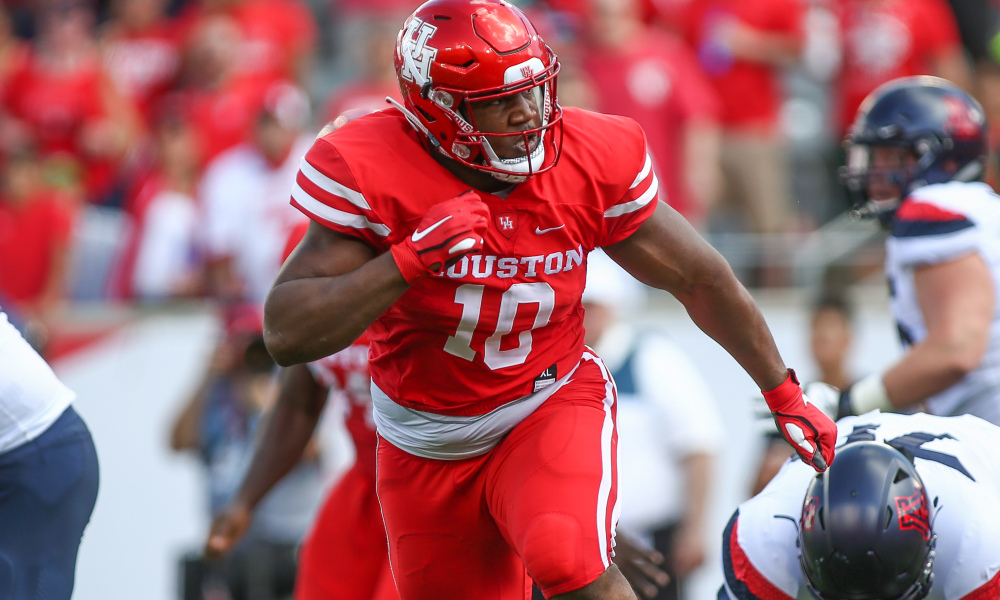 I’m in the process of building my big board and eventual mock for the 2019 NFL Draft. I’m deciding to take a different approach this season. My plan is to just grind tape on these guys until February 28th. #KLEPPMOCK1.0MARCH1st. Hopefully I’ll have a decent read on a good amount of the players by that point. I am a college student, not Mel Kiper. My access to All-22 is zilch, and I only have so much time. However scouting/debating prospects is really fun, and being able to hear TV draft guys have similar opinions on these dudes as you while they fly off the board in April is gratifying.

I will also be debuting the Back Judge analytics once I iron out the kinks. It’s going to bring analytics back from the dead after I famously killed them. For now, the TVN means “Tape Value Number”. It’s an added score out of 100 from different attributes for each position. The TVN is subject to change.

Anyways, even though I’m not pumping out mocks or big boards, I still want to create content for you, so this is how I’m going to do it over the next month and a half. In each episode, I will quickly round-up the guys I watched that day, and just tell you my basic impressions of them. I’m not really watching them in any particular order, just choosing dudes and rolling the clips. Today, I watched Oklahoma State Running Back Justice Hill, and Houston Defensive Tackle Ed Oliver.

Overall, Justice Hill was not my favorite player. This comes more from what I prefer to see in a running back rather than who Hill is as a player though. The talent is extremely obvious, and jumps off the screen. Hill consistently can make something out of absolutely nothing, and his speed coming out of cuts is insane.

Hill can make guys miss, but only if he makes them completely miss. If a defender gets a half decent strike on him, he goes down easy. In Hill’s defense, he makes guys completely miss a lot, and actually has a really effective stiff arm.

Coming from a Big 12 offense, Hill is also comfortable in the passing game. He runs routes and catches naturally. As far as pass protection goes, he isn’t great. There isn’t too much fear in him, however he has poor technique and can easily get overpowered. Running backs can often play themselves onto the field simply by being good in pass pro. Hill will not have this luxury.

My comp for him is Ameer Abdullah. He is capable of splash plays and extremely shifty, but ultimately his small stature and inability to break tackles will make his NFL success limited.

Ed Oliver is a really impressive prospect, and a definite first round talent. Houston played him up and down the line as he is a very versatile player. He is a definite target for the Lions at #8

The most impressive part of Oliver’s game is his strength. I can’t remember one play in the 4 games I watched where Oliver was blown backwards off the ball. A lineman going against him will either be holding his ground, or backpedaling, and it’s usually the latter.

Oliver’s sheer power has had some negative effects. I feel that he has just been able to rely on his strength to win, and that will create some growing pains in the NFL. Oliver undoubtedly has NFL strength, and will be able to cause problems for opposing offenses by using it, but the linemen he will be playing against in the NFL will be far superior than the ones he’s been beating up on in the American Conference. Oliver’s best ‘pass rush move’ is simply pushing the QB’s pocket and making him uncomfortable. It rarely is accompanied by some sort of rip move or effort to get off the block. He definitely will be able to add this element to his game with some good coaching, but there’s work to be done.

Oliver’s shorter stature is an advantage, as he fires off extremely low, and almost always has leverage on his lineman. He is able to push dudes back with ease. He also has a pretty good rip/swim move immediately off the line before he has engaged with the o-lineman. Sometimes he even fires off too low, and just strikes with his upper body and doesn’t bring his lower half with him. Oliver never gets pancaked, but he does end up on the ground a lot. Linemen will use his aggressiveness against him as Oliver often relies on them to keep his balance.

If he can develop a good rip move to go along with his great strength and leverage that allows him to push the pocket, Oliver could find himself among the better defensive tackles in the league in a few years. You also have to appreciate the swag that comes with wearing the number 10 as a d-lineman. At the end of the day, he’s a day one starter on most defensive lines in the league with plenty of upside.